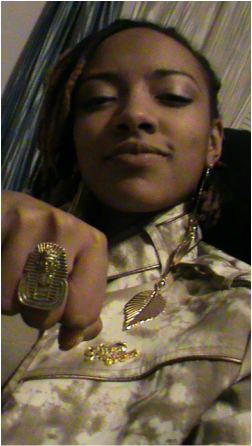 ﻿....A young woman that has risen from the mean streets of Louisville Ky’s Westend to not only graduate from high school, earn a Bachelors’ degree, marry and release three independent music CDs all by the age of 25, but ﻿Shekina Estill﻿ has proven that anything is possible with diligence and an unwavering faith in God. Now with the debut of her latest mixtape and first solo project, ﻿﻿G.R.O.W.N. Woman﻿﻿ demonstrates how life lessons can be transformed into meaningful, contemporary music.

﻿Shekina﻿ has been writing hip-hop and R&B lyrics since elementary school, entertaining her teachers and school bus mates with catchy songs on the long rides home. It was then that she was given her rap name, “﻿Mama Kina﻿”, for her role as the most mature student in class. Throughout middle and high school, she honed her vocabulary and performance skills as a rapper, taking advantage of every opportunity to perform that she could. “I can remember I even wrote a rap about oxygen for my high school Chemistry class,” says ﻿Estill﻿.

It wasn’t until enrolling at Berea College in late 2005 and hooking up with fellow artist Brittany “Miss B [Hollywood]” Harris, that she actual started recording her lyrics over instrumentation. The student/rapper duo Miss B & ﻿Mama Kina﻿ went on to release two independent CDs, Deal Wit It (2005) and Catchy Negativity (2006) before deciding to go their separate ways as artists. Estill graduated in 2009 with a Bachelors’ in Speech Communication with hopes to pursue a career in Broadcast and Video Production.

Although she has been featured on several other independent musical projects over the years, including Elevated Underground Productions “Clone Wars” and Baby Swiss’ “Shut Up…It’s My Turn Vol.3”, her latest solo mixtape has been six years in the making. ﻿﻿G.R.O.W.N. Woman: Gracefully Rise above Oppressive Worldly Negativity﻿﻿--- the title speaks for the quality and subject matter of the disc, seeking to inspire today's women (and men) to take their life experiences and grow; improve themselves for the sake of our youth and the future in general. Compiled with 16 original songs, ﻿﻿G.R.O.W.N. Woman﻿﻿ is a intermingling of love and heartbreak; struggle and triumph; faith, maturity and recollection all for the purpose of self-awareness.

Educational, Inspirational Entertaining Entrepreneurship is all that ﻿MaMa KiNa﻿ encompasses and by putting sex appeal on the back burner and bringing true artistry and individuality to light, it’s obvious she’s not your "average" female rapper. She hopes to pursue the realm of “Holy Hip Hop” more with her next release, g.R.O.W.N. WOMAN ii: FINE WINE EDITION. By cutting back on the explicit language that’s synonymous with rap today and incorporating more messages of love, peace, blessings, acceptance and brother/sisterhood and Women Empowerment, ﻿Estill﻿ wants to connect with a lost generation of youth and young adults. “The Lord has blessed me abundantly over my 25 years on this earth and if I can use my many talents to teach and inspire people and to seek him in their everyday lives, I feel obligated to do so,” she says.